Did you watch the weather forecast today? Do you ever wonder where meteorologists get the information that helps them predict the weather?

Every day, ships, buoys, and coastal platforms take millions of surface temperature, pressure, humidity, and wind measurements from across the ocean.  Although these measurements help meteorologists predict the weather each day, they also play a key role in calibrating measurements from satellites orbiting the Earth.

Traditionally, marine weather measurements from ships are only taken once an hour.  This hourly sampling proved to be inadequate to calibrate satellite sensors–particularly those measuring winds over the ocean because the winds can change in a matter of minutes at any given location. To solve this problem, in 2003, a group of scientists designed a program to collect marine weather observations once a minute from oceanographic research vessels. Because satellites take many more readings than ships or other observation platforms, increasing the number of measurements on ships allowed scientists to better match ship and satellite observations in space and time.  This helped improve the methods used by satellites to measure surface weather conditions. These calibrated satellite data are, in turn, used by the computer models to improve daily weather forecasts. 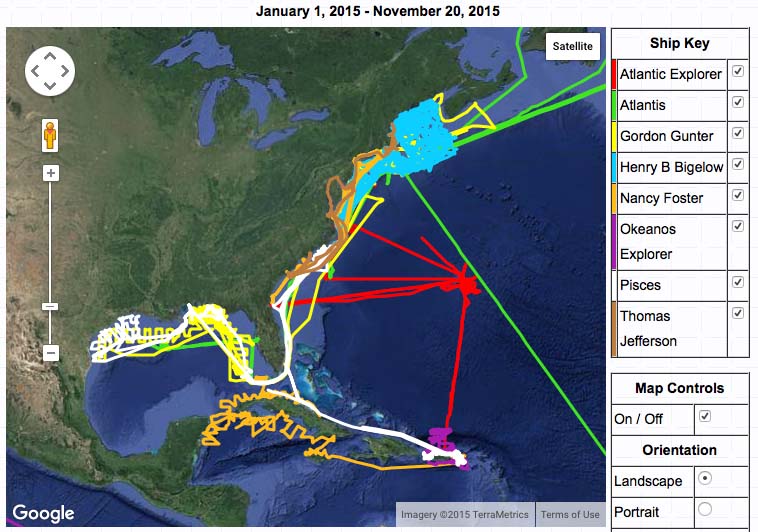 This program is known as the Shipboard Automated Meteorological and Oceanographic System (SAMOS).  Led by the Center for Ocean-Atmospheric Prediction Studies at the Florida State University (FSU), SAMOS started in 2003 with only two research ships in partnership with the Woods Hole Oceanographic Institution, but now has 32 participating ships from institutions around the globe/country.  A cornerstone of the project is partnerships.  Both the National Science Foundation and NOAA–through CPO’s Climate Observation Division–support the operation of these research vessels and the SAMOS project. All of the SAMOS data undergoes quality evaluation at FSU and is sent to the National Centers for Environmental Data (NCEI). This ensures it is readily discoverable and available to researchers and the public.

While other programs collect surface marine measurements, their vessels traditionally use established shipping lanes, one advantage of SAMOS is that the research vessels recruited to the program travel well outside commercial shipping routes.  This means SAMOS collects observations in extreme environments, including the Southern and Arctic Oceans, which are valuable to those working to calibrate satellite sensors in these regions to further improve subsequent model forecasts.

The future of SAMOS looks very bright as it continues to add ships and seeks support from other countries.  Currently an ongoing project is working to increase the number of contributing vessels. This program has grown with international support from Australia and New Zealand. The most recent addition was the RV Falkor from the Schmidt Institute of Oceanography. SAMOS is working to recruit the RV Investigator from Australia and the SAMOS team met with a delegation from South Korea last month to develop ties with the Korean research vessel fleet. Partnerships are essential and the program would not work without the commitment from the vessel operators and the dedicated marine technicians that ensure the instrumentation is working properly at sea.