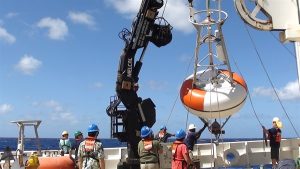 At 41 days, this was the longest and most remote cruise on a NOAA ship since the NOAA fleet was called home due to the Covid-19 pandemic. During the cruise, four PNE buoys and one Brazilian PIRATA mooring were replaced, and one French mooring was serviced (see map). Sixty-one CTD cast profiles of the water column, from the surface to 1500-meters depth, were conducted along the ship’s track to measure temperature, salinity, dissolved oxygen, seawater pressure and density, and velocity. Twelve Argo floats were also deployed.

Throughout the cruise, a group from Virginia Union University measured atmospheric aerosols and gases in support of AEROSE (Aerosols and Ocean Science Expeditions), and a team from Fearless Fund, supported by the U.S. Department of Energy and NOAA, conducted research on Sargassum, a type of floating brown algae commonly known as seaweed.

PIRATA consists of 18 open-ocean moorings and is a collaborative effort between Brazil, France, and the United States to study and improve predictability of ocean-atmosphere interactions that affect regional weather and climate variability on seasonal, inter­annual, and longer time scales. Measurements from the four PNE moorings are valuable for conducting empirical heat budget analyses, which diagnose the causes of sea surface temperature variability, and are also useful for validating models and improving tropical weather and hurricane situational awareness for forecasters at NOAA’s National Hurricane Center. This cruise was originally scheduled for June 2020 but was canceled because of the Covid-19 pandemic. As a result, the moorings were in the water almost 12 months beyond their expected lifetimes. PNE is part of the U.S. contribution to PIRATA and is a joint effort between NOAA’s PMEL, AOML, and funded through the Global Ocean Monitoring and Observing (GOMO) Program.

Thanks to the AOML PIRATA team for providing information on this cruise.

Save the Date: PIRATA-24/TAV Meeting – May 10-14, 2021 Virtual
The 24th Prediction and Research Moored Array in the Tropical Atlantic /Tropical Atlantic Variability Meeting will be held virtually this year, from May 10-14, 2021. The PIRATA/TAV meeting is held approximately once per year and welcomes participants from around the world. Learn more about this upcoming meeting and register here.

No comments to show.