The Southern Ocean that encircles Antarctica lends a considerable hand in keeping Earth’s temperature hospitable by soaking up half of the human-made carbon in the atmosphere and a majority of the planet’s excess heat. Yet, the inner workings — and global importance — of this ocean that accounts for 30 percent of the world’s ocean area remains relatively unknown to scientists, as observations remain hindered by dangerous seas.

Princeton University, NOAA and eight other partner institutions now seek to make the Southern Ocean better known scientifically and publicly through a $21 million program that will create a biogeochemical and physical portrait of the ocean using hundreds of robotic floats deployed around Antarctica and an expanded computational capacity. The Southern Ocean Carbon and Climate Observations and Modeling program, or SOCCOM, is a six-year initiative headquartered at Princeton and funded by the National Science Foundation’s Division of Polar Programs, with additional support from the NOAA and NASA. The U.S. Argo program, led by CPO’s Steven Piotrowicz, will play a major role in the project.

“The scarcity of observations in the Southern Ocean and inadequacy of earlier models, combined with its importance to the Earth’s carbon and climate systems, means there is tremendous potential for groundbreaking research in this region,” Sarmiento said.

Central to the program are roughly 200 floats outfitted with biogeochemical sensors that will provide almost continuous information related to the ocean’s carbon, nutrient (nitrate, in particular) and oxygen content, both at and deep beneath the surface. The floats are augmented biogeochemical versions of the nearly 4,000 Argo floats deployed worldwide to measure ocean salinity and temperature. SOCCOM marks the first large-scale deployment of these biogeochemical floats.

“These floats are revolutionary and this major new observational initiative will give us unprecedented year-round coverage of biogeochemistry in the Southern Ocean,” Sarmiento said. 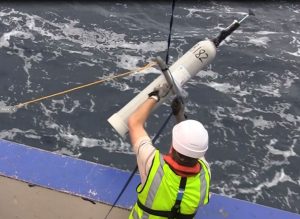 The floats will increase the monthly data currently coming out of the Southern Ocean by 10 to 30 times, Sarmiento said. That data will be used to improve recently developed high-resolution earth-system models, which will allow for a better understanding of the Southern Ocean and for better projections of Earth’s climate and biogeochemical trajectory. In keeping with SOCCOM’s knowledge sharing, or “broader impacts,” component, all the information collected will be freely available to the public, researchers and industry.

SOCCOM will provide direct observations to further understand the importance of the Southern Ocean as suggested by models and ocean studies. Aside from carbon and heat uptake, models have indicated that the Southern Ocean delivers nutrients to lower-latitude surface waters that are critical to ocean ecosystems around the world. In addition, the impacts of ocean acidification as levels of carbon dioxide in atmosphere increase are projected to be most severe in the Southern Ocean.

Other than administering the project, Sarmiento and other Princeton researchers will co-lead the modeling and broader impacts components, as well as coordinated data management. Researchers from NOAA’s Geophysical Fluid Dynamics Laboratory housed on Princeton’s Forrestal Campus will carry out high-resolution earth-system simulations in support of the modeling effort, which is led by the University of Arizona and includes collaborators from the University of Miami.

The floats will be constructed at the University of Washington with sensors from the Monterey Bay Aquarium Research Institute; NOAA’s Climate Program Office will provide half of the basic Argo floats. Float deployment, observation analysis and data assimilation will be led by the Scripps Institution of Oceanography at the University of California-San Diego. Climate Central, a non-profit science and journalism organization based in Princeton, will oversee the broader-impacts component. Researchers from Oregon State University and NOAA will develop the floats’ carbon algorithms.

“The SOCCOM effort is the first systematic expansion of the US Argo program into biogeochemistry. The unique subsurface ocean observations from SOCCOM will contribute towards our efforts to observe the global oceans,” said David Legler, director of NOAA’s Climate Observations Division.

In addition, NASA will support a complementary project involving researchers at the University of Maine and Rutgers University that will equip the floats with bio-optical sensors intended to gather data about biological processes in the water column.

This web story was written by Morgan Kelly, science writer for Princeton University, and includes an additional quote from NOAA’s David Legler. To view the original story on Princeton’s website, please click here.