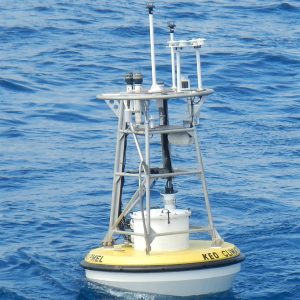 A study published in Global Biogeochemical Cycles contributes evidence that the Kuroshio Extension transition zone is a biological hot spot for carbon cycling within the North Pacific carbon sink region.

Researchers used data recorded over seven years at the NOAA Kuroshio Extension Observatory surface mooring in the North Pacific Ocean. NOAA maintains this mooring in addition to the Station Papa buoy near Alaska to measure carbon dioxide in the sea surface and atmospheric boundary layer.

Authors in this study stated that it is still unclear how other processes, such as ocean eddies, influence carbon cycling.

Physical and biological processes occurring in the ocean are responsible for continuously cycling carbon between the atmosphere and the ocean, which sequesters, or absorbs, a major part of the atmospheric carbon dioxide.

This study was supported by the Ocean Observing and Monitoring Division.