NOAA’s annual Arctic Report Card, introduced in 2006 by the NOAA Climate Program Office, found that cooler temperatures in the summer of 2013 across the central Arctic Ocean, Greenland and northern Canada moderated the record sea ice loss and extensive melting that the surface of the Greenland ice sheet experienced last year. Yet there continued to be regional extremes, including record low May snow cover in Eurasia and record high summer temperatures in Alaska. The NOAA Climate.gov team produced visual highlights for the report.

Temperature anomalies for June-August 2013 compared to the 2007-2012 average. Many areas of the Arctic got a reprieve from the record warm of the past 6 summers. Map by NOAA Climate.gov, based on NCEP Reanalysis data from NOAA’s Earth System Research Laboratory. Download here / Full gallery (Credit:NOAA)

“The Arctic caught a bit of a break in 2013 from the recent string of record-breaking warmth and ice melt of the last decade,” said David M. Kennedy, NOAA’s deputy under secretary for operations, during a press briefing at the American Geophysical Union annual meeting in San Francisco. “But the relatively cool year in some parts of the Arctic does little to offset the long-term trend of the last 30 years: the Arctic is warming rapidly, becoming greener and experiencing a variety of changes, affecting people, the physical environment, and marine and land ecosystems.”

Kennedy joined other scientists to release the Arctic Report Card 2013, which has, since 2006, summarized changing conditions in the Arctic. One hundred forty-seven authors from 14 countries contributed to the peer-reviewed report. Major findings of this year’s report include: 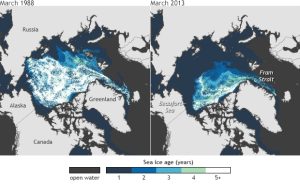 Age of ice at the end of March 1988 compared to March 2013. Category 1 is first year ice–ice that has survived one summer melt season. In March 2013 at the winter maximum, 78% of the Arctic ice pack was only one year old, while only 7% was old (4+ years), thick ice. Map by NOAA Climate.gov, based on data provided by Mark Tschudi, University of Colorado.

“The Arctic Report Card presents strong evidence of widespread, sustained changes that are driving the Arctic environmental system into a new state and we can expect to see continued widespread and sustained change in the Arctic,” said Martin Jeffries, principal editor of the 2013 Report Card, science adviser for the U.S. Arctic Research Commission, and research professor at the University of Alaska Fairbanks. “But we risk not seeing those changes if we don’t sustain and add to our current long-term observing capabilities. Observations are fundamental to Arctic environmental awareness, government and private sector operations, scientific research, and the science-informed decision-making required by the U.S. National Strategy for the Arctic.”

In 2006, NOAA’s Climate Program Office introduced the State of the Arctic Report which established a baseline of conditions at the beginning of the 21st century. It is updated annually as the Arctic Report Card to document the often-quickly changing conditions in the Arctic. To view this year’s report, visit http://www.arctic.noaa.gov/reportcard/.