Steve Piotrowicz, program manager at CPO’s Office of Climate Observation joined the crew of the R/V Tangaroa in mid-June for a Deep Argo Development cruise. The R/V Tangaroa, operated by New Zealand’s National Institute of Water and Atmospheric Research sailed from Wellington, New Zealand on June 16, 2014. 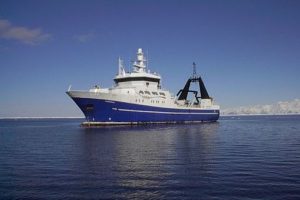 The primary objectives of the cruise were (1) to deploy two prototype Deep Argo (6,000 meter plus) floats  and (2) undertake deep (~5500m) CTD casts for sensor testing and development.  In addition, 6 SOLO2 Argo (2,000 meter) floats were deployed in transit, finally, to make a “virtual field trip” for school uptake.  The SOLO2 floats and the Deep Argo floats were provided by Scripps Institution of Oceanography as part of NOAA’s Argo Program.

The ship proceeded to an abyssal plain east of Kermadec Ridge (>5500 m deep) to deploy the prototype Deep Argo floats. The balance of the voyage was to use the shipboard CTD to collect calibration data and to test new sensors. 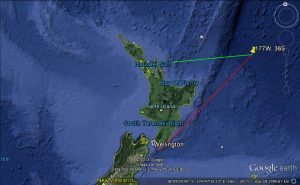 The two Deep Argo floats were deployed several days apart to enable analysis and evaluation of the first float before deploying the second.  The floats each performed a series of test dives from 150 meters to 4,000 meters and then 5,000 meters.  The floats are presently both operating to 5,500 meters and the first profile to 5,500 meters was good.  It takes 24-36 hours for a float to complete a decent-ascent cycle.

The Deep floats are now going to conduct full profiles every three days for year.  The floats will be recovered after one year to evaluate technology and a larger array of instruments will be deployed in the same region.  Those floats will be operated such that they can endure for four years.  Energy consumption and operational considerations for the pumping systems dictate that each profile will have different sampling intervals throughout the cast – high resolution near the surface and low resolution at depth. 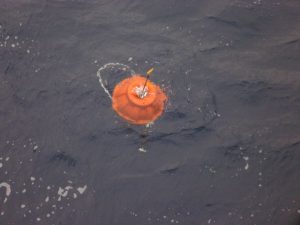 Preliminary results of the extensive CTD cast program indicate that the data appear to be of very to be of very high quality, with good agreement throughout the voyage from the paired sensors.  The initial expectations for the Deep Argo sensor (SBE-61) were to deliver SBE-61 temperature within 2milli-degrees Kelvin, salinity within 0.005psu and pressure within 5 dbars.  First differences of the raw data suggest they are within 1millidegree K, 0.006psu, and 4 dbars.  These estimated accuracies still have to undergo additional quality control tests.

The product of the “virtual field trip” are available at: http://rata.learnz.org.nz/summary.php?vft=argofloats142

Finally, the crew of the Tangaroa performed exceptionally well; in particular in deploying the floats and conducting the CTD casts which were, basically, being done continuously while on stations except for when floats were being deployed.