Assessing Baroclinic Structure and Variability of the Brazil Current 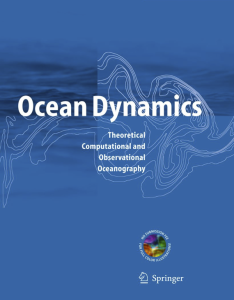 The Brazil Current plays a key role in water transport into higher latitudes in the South Atlantic Ocean, but several aspects of its baroclinic structure and variability remain unexplained.

A study funded in part by the CPO’s Climate Observation Division assessed the baroclinic structure and variability of the Brazilian Current near 22° S, comparing observations from the High Density XBT Transects Program and three distinct numerical models with data assimilation. In a paper published in Ocean Dynamics, researchers of this study state that the models present higher transport and less variability than observations, partly because of differences in temperature and ocean dynamics along Brazil’s coast.

The Brazil Current (BC) is the Western Boundary Current of the South Atlantic subtropical gyre, the dominant dynamic feature in the South Atlantic Ocean. The importance of this current lies in that it is the main conduit of subtropical waters to higher latitudes in the South Atlantic Ocean. This study assesses the structure and variability of the BC across the nominal latitude of 22° S using data from the high-density eXpendable BathyThermograph (XBT) AX97 transect and from three numerical ocean models with data assimilation. This XBT transect was implemented in 2004 and represents one of the longer-term monitoring systems of the BC in existence. The goal of this work is to enhance the understanding of the temporal and spatial variability of the ocean dynamics in the southwestern South Atlantic Ocean by using a suite of hydrographic observations and numerical model outputs. In the present work, 37 XBT transect realizations using data collected between 2004 and 2012 are used. Daily outputs covering the same time period are evaluated from Hybrid Coordinate Ocean Model with the Navy Coupled Ocean Data Assimilation (HYCOM-NCODA) with a 1/12° horizontal resolution, and GLORYS2V3 and FOAM, both with a 1/4° horizontal resolution. These Ocean Forecasting and Analysis Systems (OFAS) are able to capture the mean observed features in the 22° S region, showing a BC core confined to the west of 39° W and an Intermediate Western Boundary Current between the depths of 200 and 800 m. However, the OFAS tend to overestimate the mean BC baroclinic volume transport across the AX97 reference transect and underestimate its variability. The OFAS show that the coastal region between the coastline and the western edge of the AX97 transect plays an important role in the mean BC total transport, contributing to up to 23 % of its value, and further that this transport is not sampled by the XBT observations with its current sampling strategy. In order to understand the variability of the BC, a statistical classification of the BC is proposed, with the identification of three different events: weak, intermediate, and strong.