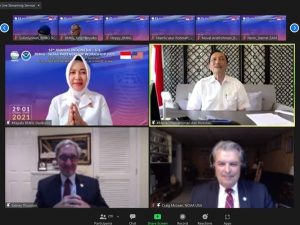 In recent years, extreme weather events in the United States have become more common and intense, costing billions of dollars and hundreds of lives. These droughts, hurricanes, floods, severe storms, and more are not just affecting the US, they are global. Improving the accuracy of predictions is key to saving lives and property, and for many extreme event forecasts that all starts in the ocean.

Through the Global Ocean Monitoring and Observing Program, NOAA has maintained a 16 year partnership with Indonesia’s Badan Meteorologi, Klimatologi, dan Geofisika (BMKG) agency in support of ocean science and improving weather predictions that affect both countries. Through this partnership, BMKG provides 30 days of ship time to NOAA to service five RAMA buoys each year; over the course of the partnership, this is equivalent to providing more than $10M in shiptime. NOAA provides an annual workshop and sponsors two scientists from Indonesia at the Climate Prediction Center each summer.

This September, the 16th Annual Indonesia-NOAA Ocean-Climate Observations, Analysis, and Maritime Applications Partnership Workshop took place virtually over three days, with over 200 participants despite the 12 hour time difference between the regions. The theme for this year’s workshop was “Sub-seasonal to Seasonal Forecast: Detecting Extreme Weather Events at a Climate Scale.” Opening remarks were provided by US ambassador to Indonesia Sung Y. Kim and Assistant Administrator for NOAA Research, Craig McLean, followed by Director-General of BMKG, Dwikorita Karnawati. Presentations were led by NOAA and BMKG experts and academia on topics such as ENSO and the Madden-Julian Oscillation, and this year the workshop expanded to include sessions on tsunami and drought forecasting.

“As an archipelagic country, the land-sea distribution and complex topography make disaster prediction a challenge for Indonesia,” said Karnawati. She elaborated that extreme weather predictions with diurnal cycles, synoptic weather systems, Madden-Julian Oscillations, El Nino, and monsoons provide benefits for Indonesia’s socio-economic welfare. Karnawati has stated that it is a priority to make the BMKG a world-class organization in line with other global climate centers, and that “collaboration with NOAA is one way we play this role.”

The long standing partnership between NOAA and BMKG – 16 years in total – is one of the longest continuous science and technology partnerships between the US and Indonesia. The partnership supports the Biden Administration’s priorities for a “free, open, inclusive [and] healthy” Indo-Pacific region, as described in the joint statement from the summit between Japan, India, Australia, and the United States in early March of 2021. NOAA also supports a 12-year long partnership with India’s Ministry of Earth Sciences.