The Intergovernmental Panel on Climate Change (IPCC) 5th Assessment Report on “The Physical Science Basis” of climate change has been completed and will appear online on Sept. 30, 2013. This report represents a milestone in the understanding of the Earth system and climate science. Scientific research funded by NOAA’s Climate Program Office (CPO) is foundational to advancing IPCC reports. CPO supports climate science research reflected in the IPCC’s report through its Climate Observations and Monitoring (COM); Earth System Science (ESS); and Modeling, Analysis, Predictions, and Projections (MAPP) programs. These programs sponsor interdisciplinary collaborations involving NOAA labs and the external science community to extend the agency’s research and operational capabilities, and to improve scientific understanding, observations, and modeling of the climate system. This work is foundational to this first report of the IPCC’s 5th Assessment.

Working with academic, federal, and international partners, CPO’s COM program sustains ocean-wide observations of sea level, temperature, salinity, currents, chemical composition, and heat and gas exchanges with the atmosphere. These observations are essential to improving our understanding of the movement and budget of energy and matter within the climate system, and to advancing understanding of the processes that underlie climate variability and change. 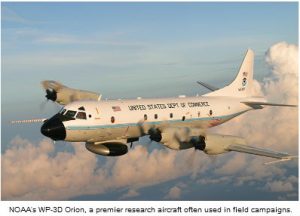 Observational systems deployed and sustained by COM, as well as through ESS-sponsored field experiments (e.g., DYNAMO/CINDY in the Indian Ocean), improve understanding of climate processes. Insights and data from these observational systems and experiments enable advances in intra-seasonal to decadal climate prediction, contribute to the evolution of climate models, and provide initial conditions from which model runs can be started. Researchers funded by the MAPP and ESS programs work to develop models that better simulate historical and projected climate variability and change, and use the resulting simulations to analyze predicted changes over the next decade and projected changes over the 21st century.

The ESS program supports research related to the Atlantic Meridional Overturning Circulation (AMOC), a major oceanic transporter of energy and matter. Scientists study the AMOC to better understand its role in long-term climate, potentially improving scientists’ ability to predict global climate on timescales ranging from a year to a decade. ESS supports research to understand AMOC mechanisms and variability in present-day and future scenarios.

The Arctic region has undergone rapid change over the past few decades. Understanding, observing, and modeling these changes is critical because of the region’s sensitivity to warming, as well as the United States’ geopolitical interests in the region. Additionally, there are connections between the Arctic and climate patterns elsewhere around the world. 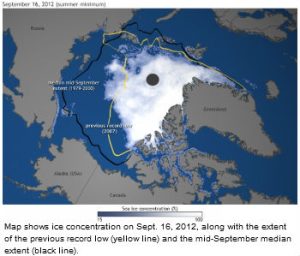 COM’s Arctic Research Program (ARP) provides guidance and support for building, maintaining, and expanding the Arctic Observing Network. Heat, salt, freshwater, nutrient volume, and ecosystem fluxes are monitored in the Pacific Arctic. Ice extent and thickness and their impacts on Arctic biodiversity are also observed. Atmospheric climate observations including fluxes of methane and carbon dioxide are monitored at ten Arctic observatories around the Arctic Ocean. These activities are vital to scientists’ ability to detect climatic and environmental changes in near real time, and to understand how and why climate-related changes are amplified in the Arctic.  The data produced by ARP are critical to IPCC documentation of the physical and ecological state of the Arctic Ocean, its bordering seas, and adjacent coastal areas. In addition, the MAPP program funds research to improve model representation of Arctic sea ice to advance scientific understanding of climate variability in the region.

Changes in the concentration of human-produced greenhouse gases and aerosols in the atmosphere are at the core of all IPCC assessments. The scientific community’s understanding of how these gases and particles influence climate has grown with each report. ESS-sponsored collaborations involving NOAA scientists and academic researchers have enabled advances in quantifying poorly understood aerosol formations and their effects on clouds. Greenhouse gases have been monitored for decades by NOAA scientists via surface and aircraft measurements. Utilizing this data, ESS recently established a Carbon Tracker Science Team focused on delivering North American carbon fluxes for use as a benchmark for scientists and decision makers. Additionally, ESS supports studies that further improve understanding of the sources and sinks of all greenhouse gases as well as aerosols and their precursors. 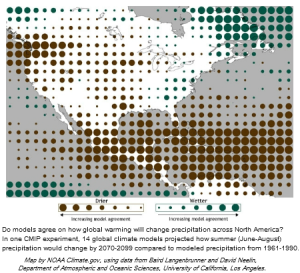 Climate and Earth system models were used to inform the IPCC’s 5th Assessment. These models incorporate the effects of projected greenhouse gas concentration scenarios. Scientists used the models to develop projections of 21st century climate and experimental decadal predictions. Research funded by the MAPP program contributes to the development of climate and Earth system models and leverages data produced by the massive Coupled Model Intercomparison Project, Phase 5 (CMIP5), an international effort under the auspices of the World Climate Research Program. With the CMIP5 resource, researchers perform analyses aimed at understanding model projections and associated uncertainties. The MAPP program organized a research Task Force to analyze the CMIP5 projections of North American climate conditions, which improves understanding of where and how climate is expected to change.  Additionally, their work shows how and where model simulations of Earth’s climate have become more accurate, and where more improvement in the models is still needed.  The Task Force’s findings provide critical information for the IPCC Assessment’s discussion of projected climate changes and model performance.

Understanding of North American climate, as simulated by models for the 20th and 21st centuries, is documented in a special collection of new papers published by the Journal of Climate. Utilizing CMIP5 data, Task Force

research evaluates model performance to better characterize uncertainty at regional scales, understand how model performance is changing over time, and explore model capabilities in simulating basic processes in the climate system. ESS- and MAPP-funded researchers are examining the prospects for decadal prediction considering predictability associated with AMOC and exploring potential prediction methodologies. Research projects are also focused on improving the representation of clouds in climate models. Observational platforms sponsored by the COM program are critical to all of the work described above.